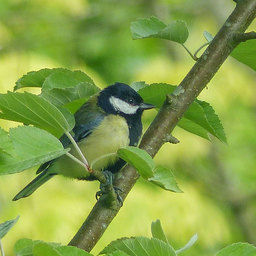 A lot of growing has taken place in 10 days!

Video 22nd May 2015
About 7 minutes of video clips showing glimpses of the growing chicks.

Video 20th May 2015
There were six eggs but it appears that there are just four hatchlings in the nest.  Not surprising - this very cool May weather must make it hard to find enough insects and grubs to feed six mouths.  We could be wrong -it's hard to tell, but only four beaks open up when a parent bird appears.  Did the other two survive?