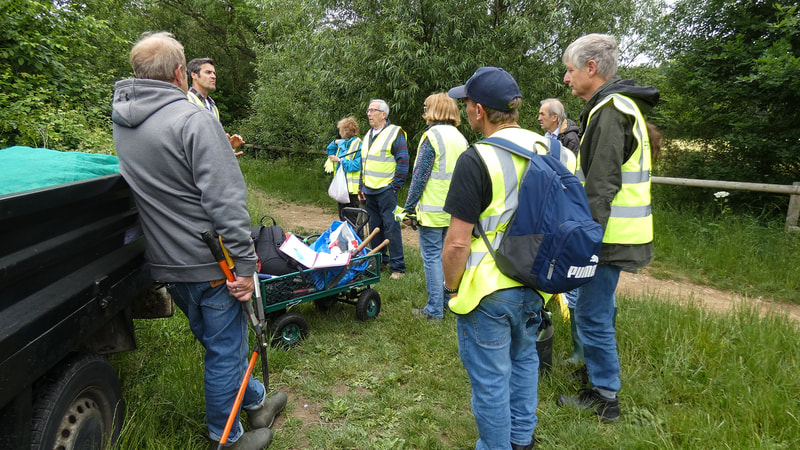 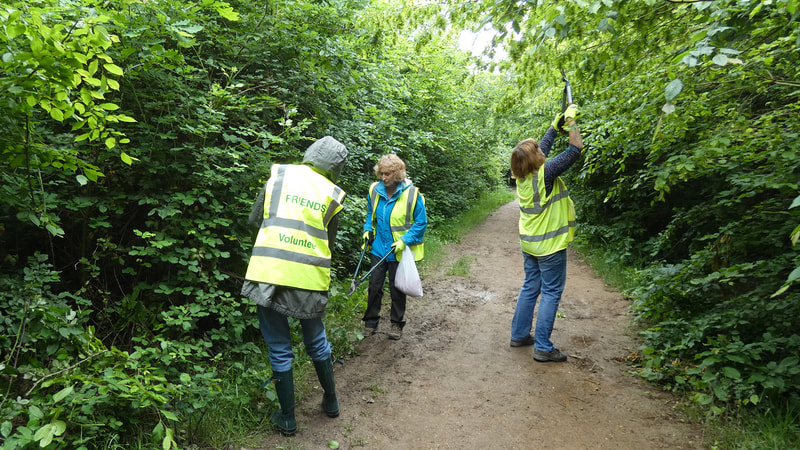 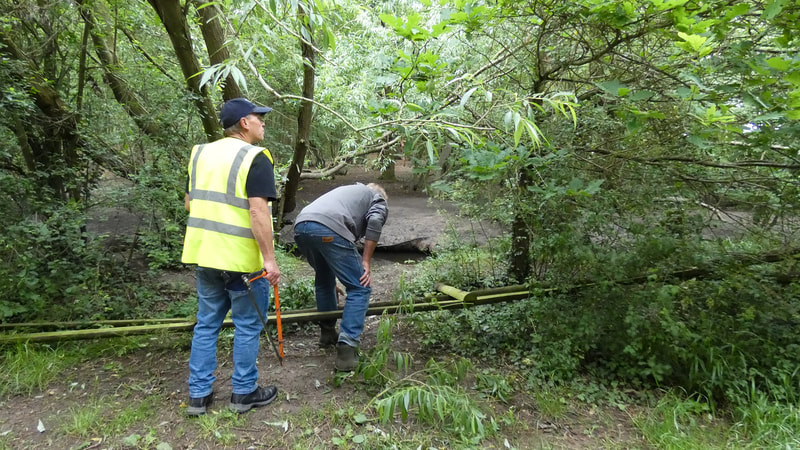 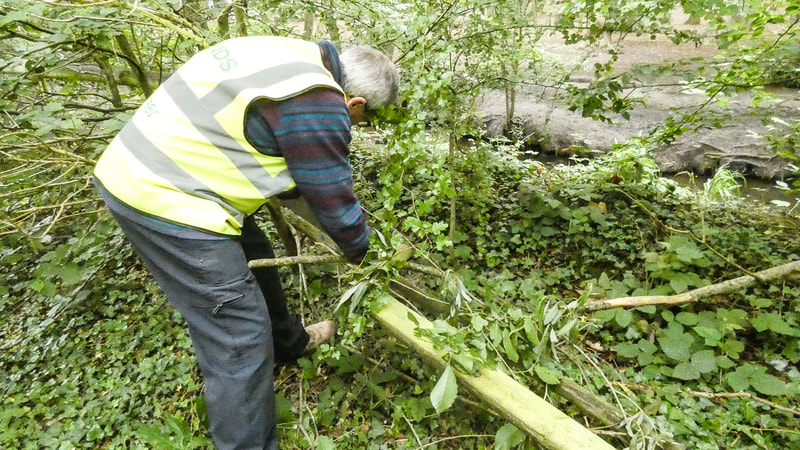 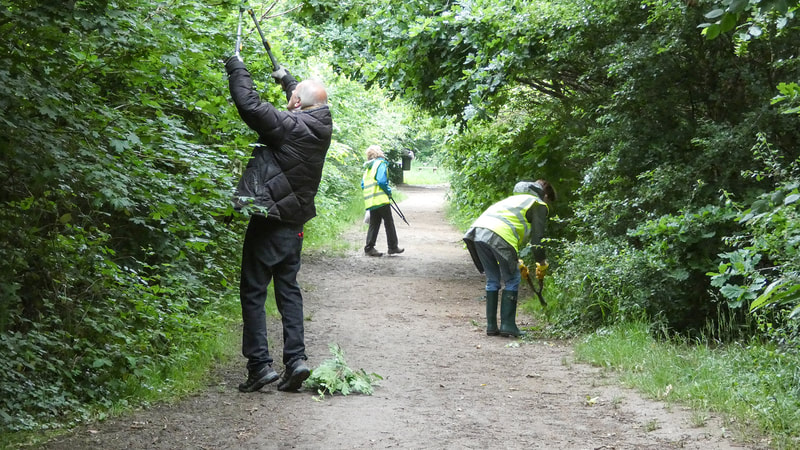 April 10th 2019:  Invitation to all to take part in the Great British Spring Clean.  Great morning's work - thanks everybody.
March 13th 2019:  cancelled due to high winds
February 13th 2019:   This month we  have been cutting back brambles etc. along the paths around plantations using our new tools bought with the Aviva grant money.  Good sharp shears and loppers and strong gloves for all.  We were also putting in more reminders for riders to keep to the bridleway.  With the meadows so wet at the moment more walkers are using the bridleway which could make it difficult for riders.  However, if the horses churn up the paths through and around the plantations walkers can't use those either.  Common sense on all sides, understanding and a bit of give and take makes for a pleasant experience all round.
January 9th 2019: Conservation Volunteers working in the Traditional Orchard today - a little light pruning. Also, as usual, litter picking - where does it all come from! It was really cold today, a very chilly wind whipping across the fields. Brrrrr. Still a very good turn out. Thanks so much everyone for turning out in January to look after the orchard and clear up other people's mess - and check out those new hi-viz vests!
December 12th 2018:  No work this month, but   well earned drink at The Cock Inn.  Delighted to congratulate Anne Thurgood - volunteer of the year!
November 13th 2018: A day earlier than planned in order to get some rescued green winged orchids safely relocated into the park before their root plugs dried out.  Thanks to Richard for collecting them and to our volunteers for carefully planting 35 small plants.  We wish them every success in their new 'secret' location! 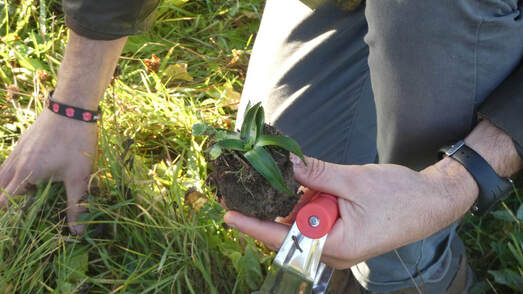 October 10th 2018:  This month volunteers cleared the path from Pooh Sticks Bridge up to the bridleway.  This path runs between the byway and the plantation and had become very overgrown.  By cutting back the brambles, blackthorn and other growth the path is wider and more light is let in.  Hopefully this will help to keep it passable as the winter weather approaches.  We noticed some apples growing in the plantation - quite sweet and the blackbirds are enjoying them.  Volunteers also cut back growth along the path from the bins towards the lake. 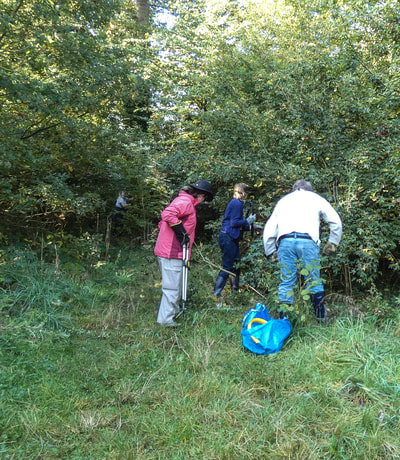 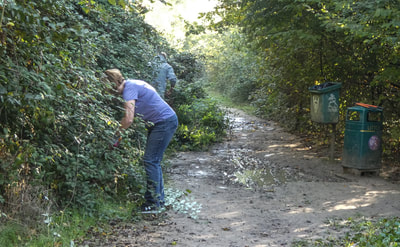 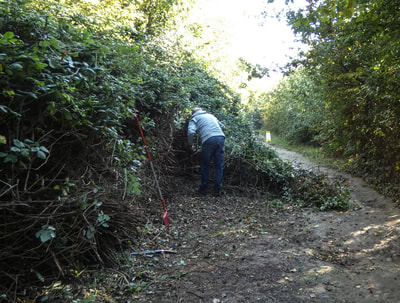 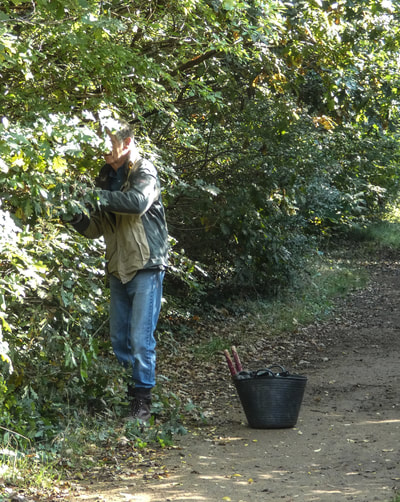 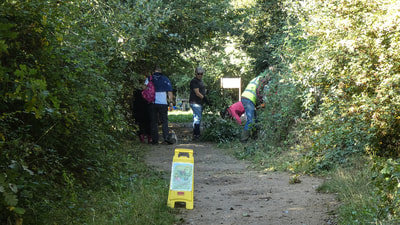 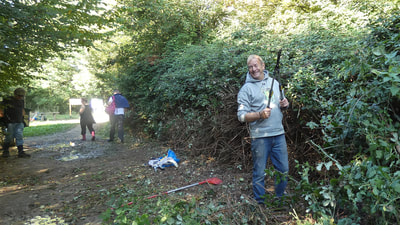 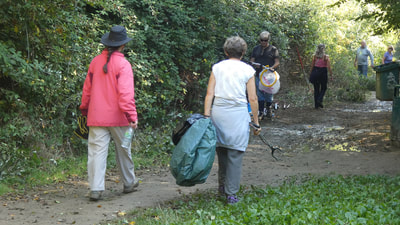 September 12th 2018:  Volunteers cut back brambles and blackthorn round one of the plantations keeping another walk open.  Plenty of sloes this year and we took the opportunity to gather some with sloe gin in mind!  Beautiful autumn colour and another great morning's work. 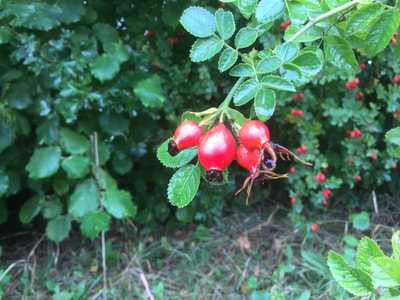 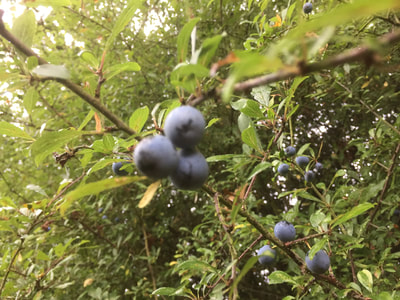 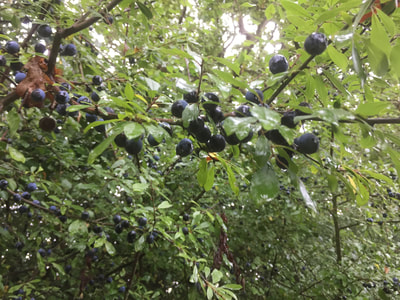 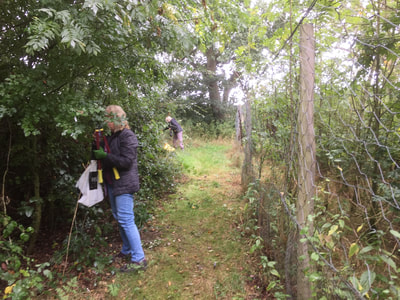 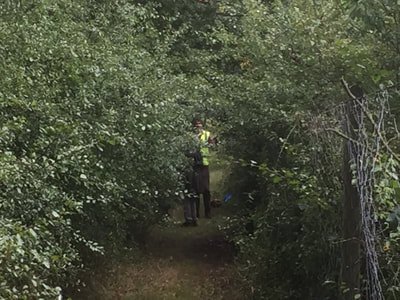 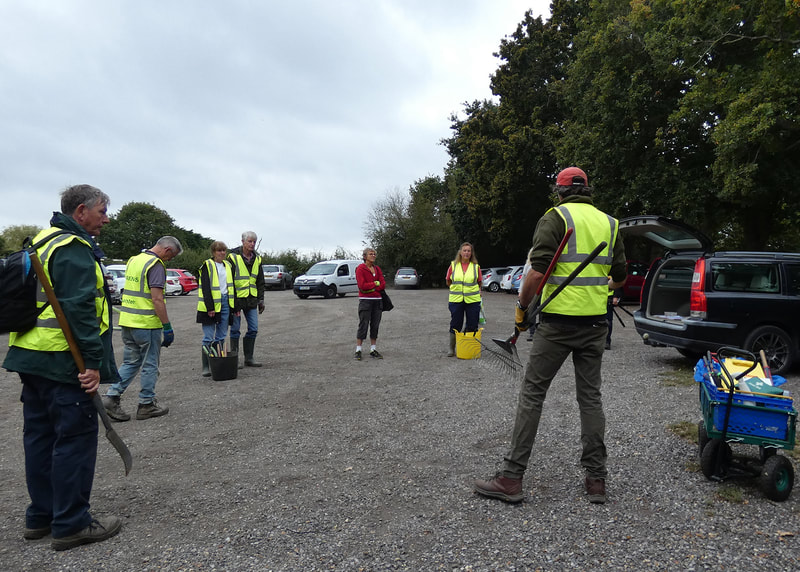 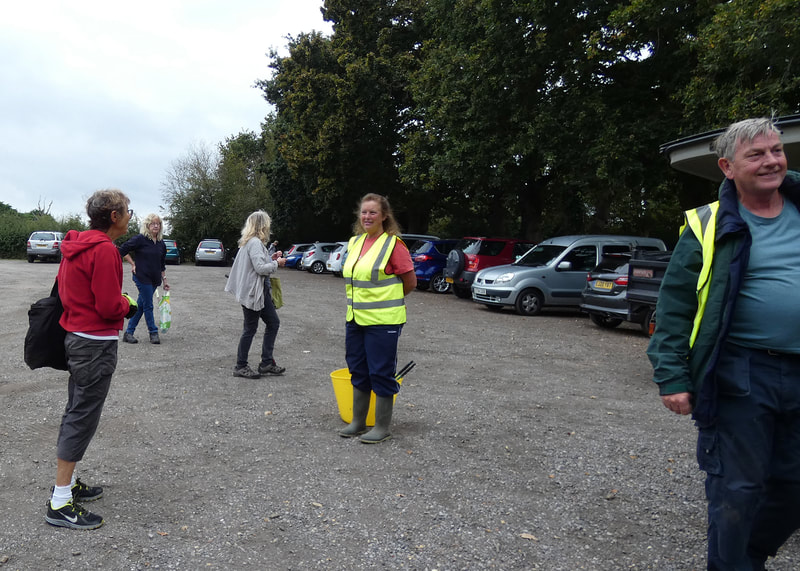 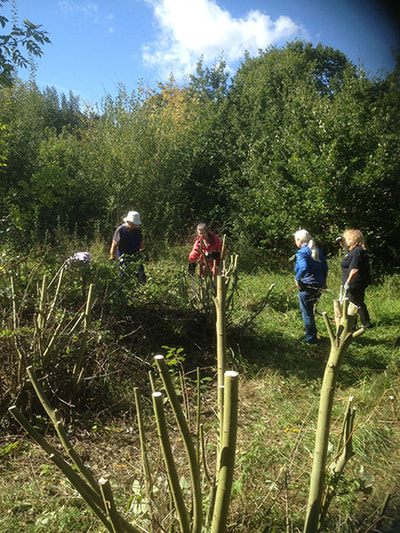 August 2017:  Despite the forecasts of dry weather until midday our volunteers worked in pouring rain - again!  Well done, hardy trojans one and all!
Three main tasks completed this month with the support of Max and Jamie of the RDC Open Spaces Team. Our two new finger posts were erected, the footpath behind Blatches Farm and the Hazel Grove up to the lake was cut back and four bags of rubbish were cleared from round the lake.  Excellent work - thank you everyone!  More about the signs here.
July 2017:  A wet start this morning after welcome heavy rain overnight.  It was still raining hard at 10am this morning but volunteers met in the Orchard ready to trim the grass back round the young trees ready for the Open Spaces Team to mow the grass between the rows.  It was very pleasing to see how well these little trees are doing.  Fruit on nearly all of them.  We then moved on to the lake to clear litter - messages via the website have alerted the committee and although two black bags of litter were collected over the weekend, there was still more to be done.  Thanks to David who brought water and cleaning materials and took the time to clean the park signs that had become very green and mossy, and thanks to all of you for turning up this morning in the rain and working so hard.
June 2017: this month we cut back some of the overhanging and encroaching growth along the bridleway.  It was warm and very sunny and we worked in the shade where possible.  Everything in the park is blooming.  Common spotted orchid seems to be on the increase - good to see.  Thanks everyone for working so hard and thanks to the RDC open spaces team who worked alongside us and have been mowing some of the paths through the meadows.
April 2017: The path around the secluded 'hibernaculum' plantation. Many thanks to the volunteer work party today. We cleared around another plantation and opened up another walk. This will probably be the last cutting back we can do for a few months. We had to be very careful that we were not disturbing nesting birds and by next month the nesting season will be well underway. Wild primroses, broom, stitchwort all seen along this short walk, which is kept fairly secluded to protect the hibernaculum (lizards' home) which it surrounds. The last of the blackthorn blossom was falling like confetti.
March 2017:  The path that runs round behind the plantation to the south of 'Sharon's Bench'.  Those of you who come into the park via the Old Southend Bridleway and the short footpath also know as "Poo Alley" (for unfortunately obvious reasons), will know that this path has been inaccessible for two or three years now.  A daunting task surely - but not to our enthusiastic Friends.  With support from RDC the whole length of the path has been cleared and we have had several very positive comments of congratulation already.  Well done everyone, a major task completed and everyone had a good time too.  Win, win!  THANK YOU ALL!
February 2017:  Our first work day of the new year was very cold and damp.  We didn't expect many volunteers to turn up but you surprised us!  It was great to see so many of you braving the chilly February morning and we set to with enthusiasm.  This month's task was to check the Traditional Orchard, carry out some light pruning and dead wooding, remove stakes and feed the trees, including all the cherry trees round the perimeter of the orchard in in the adjoining meadow.  The cold wind whipped across the field but with the help of a two man team from RDC the work was finished quickly and the orchard left ready for spring.  You can find out about the varieties of trees in the orchard HERE.  We moved on to the old gun club range where there is a long clay bank, warm and sheltered later in the year and visited by insects that make holes and nests in the bank.  An unusual and interesting habitat.  It is several years since the Friends cleared this area and it was due another tidy up so everyone set to work.  Once again the team from RDC were a great help, stacking the thick brambles and blackthorn that we cut back to form a dense mass opposite the bank and provide another type of habitat.  It would be great for hedgehogs - if only we had some in the park!  Plenty of other small mammals will benefit from this new habitat though.
​            THANKS TO EVERYONE WHO WORKED SO HARD - YOU ARE REALLY MAKING A DIFFERENCE!
August 2016:  The volunteer group cut back growth along the path in the plantation south of the stream, close to Pooh Sticks Bridge.  The path that runs beside the byway was also cleared and the path through the plantation behind Edwards hall park was cut back too.  Thanks to everyone who turned up to help - a great effort.

July 2016:  Thanks to everyone who helped clear the path beside the stream this month.  Just in time for the Kirste 5 mile race.  It made all the difference! 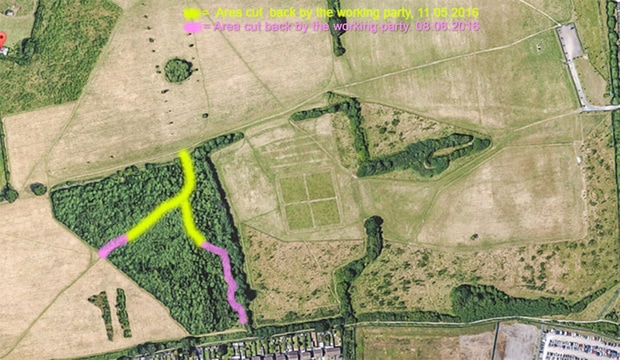 June 2016 - Finishing work in the first plantation.  Today we finished cutting back the scrub and overhanging trees that have made the path through the plantation so narrow and dark.  We hope that with the extra light let in the path may not get so very wet and muddy next winter.  We also managed to open up the natural path that runs north-south to the old bridleway and you can walk two abreast along most of it now.  Just about 20 metres to go at the bridleway end where some nettles need to be strimmed back by RDC.  It was a working and learning experience. We learned that the rare wild service trees,  when found in ancient woodland are a good indication of how very old the wood is.  The tree does not propagate easily through seeds and sends out runners slowly over tens and hundreds of years.  The measurement of ground covered by the trees is an indication of how old the woodland area is.  Several Wild Service trees have been planted in the park - a clue for future generations.  We also saw purple salsify, quite common in the park, and probably brought to this country by the Romans as a food crop.  The roots are like thin parsnips.  Also spotted this morning, grass vetchling, a member of the pea family with unusually long thin leaves.  It grows among grasses and the tiny deep pink flowers are suspended by very thin stalks.
So..  another very successful morning's work - and this time we didn't get wet.  It was hot and sunny.  Lovely.
April 2016 - First Conservation Volunteer Group working party.  Tasked with clearing an area of ground round the young trees in the traditional orchard the working party achieved much more than expected.  Over a hundred trees now have a weed and grass free area around the base ready for feeding. Thanks to all who worked so hard.  We thoroughly enjoyed the morning and are looking forward to the next work day in May.