Our Stream: exploring the Roach

Chris Taylor investigates the stream which runs through our park.
The River Roach is in the form of four main streams which originate in the Rayleigh Hills to the west of  Rochford and flow east. They then flow towards the centre of the Rochford Basin, a circular feature which may have been caused by an asteroid impact millions of years ago. To the east of Rochford, the river becomes tidal, and is governed by the Crouch Harbour Authority.
To the west of Rochford, there is some doubt as to which of the four streams is really the Roach. 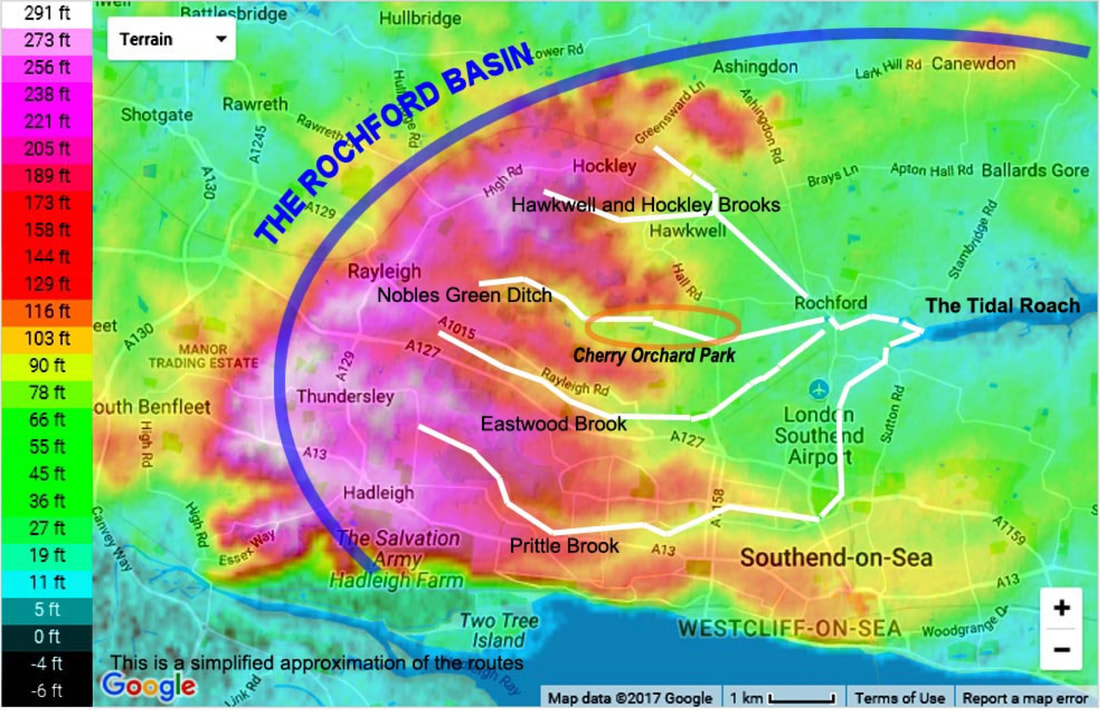 The stream running through Cherry Orchard Park, is generally considered to be The Roach locally, and is named as such by Google Maps, hence our own sign in the park, although, it is one of the 4 tributaries of the Roach at its entry into the sea, and the environment agency, for example consider the stream in our park to be Nobles Green ditch. The river courses are designated as "heavily modified" from their natural state by the Environment Agency, who measure the water quality. This is moderate for most of the tributaries, and the chemical status has improved since 2013.
Our stream does sometimes have mild pollution problems at times when there is heavy rain as there may be some run-off of fertiliser from the fields to the north of the stream, and also from the water treatment works near to Grove Wood.
Nobles Green Ditch 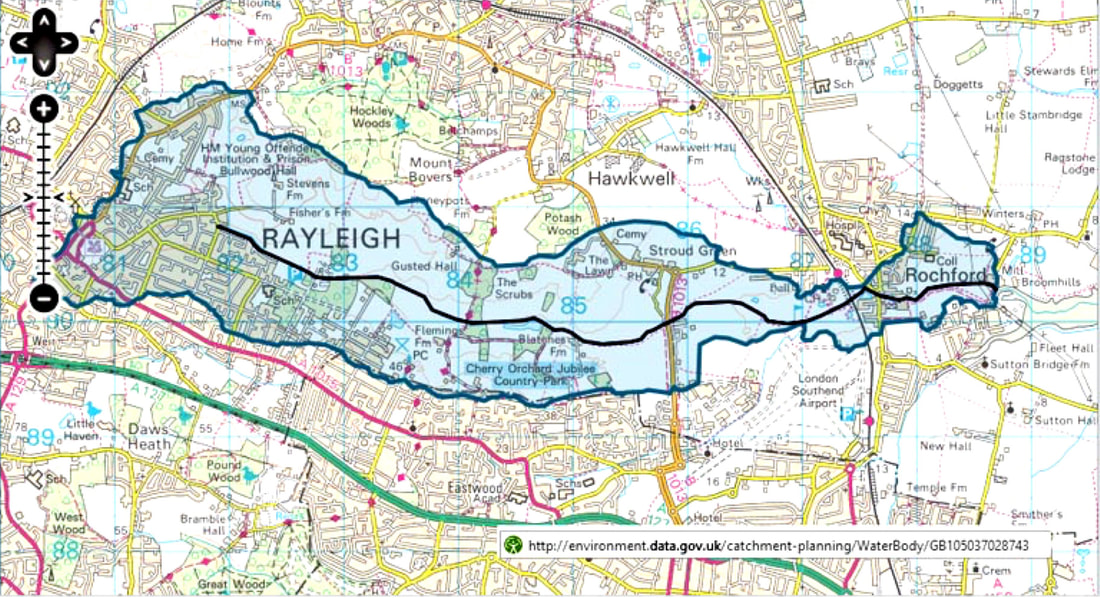 The four Roach tributaries flow across the Rochford Basin, which is a nearly circular topographical basin, surrounded by a ring of hills, with Rochford near its centre. The basin is about 4 – 5 miles in diameter. The highest points of the range are at Canewdon, Ashingdon, Hockley, and Rayleigh around its perimeter and on to Thundersley where the Prittle Brook rises. The rise of the land at Eastwood at the southern boundary of the park divides the valleys of the Nobles Green Ditch (our stream) and the Eastwood Brook.
Four main streams drain from the Rayleigh Hills, and flow in a generally easterly direction until they reach Rochford. The southernmost is the Prittle Brook which starts in Thundersley, goes through Belfairs Golf course and eastwards following Fairfax Drive to Priory Park. From there it then follows the railway line past the old Ekco site parallel to Manners Way towards the airport, and then across to the bridge in Sutton Road.
The Nobles Green Ditch, which is the stream, according to the Environmrnt Agency, which runs through Cherry Orchard Park, rises near Main Road, between Hockley and Rayleigh in the dip between the speed camera(!) and the Gattens, the houses set back from the main road.  It then flows southwards towards Bull Lane and under The Chase, turning eastwards towards the back of the playing fields at Grove School.
It gets ‘topped up’ a bit near here because it is contributed to, by the outflow from the water treatment works at the top of Connaught Road. This isn’t too much of a worry because the water is filtered by a reed-bed system! 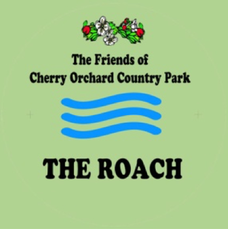 After passing behind Grove and New England woods it flows on to ‘Pooh Sticks Bridge’ the ‘centre point’ of the park. Pooh Sticks Bridge got its name from ‘Winnie the....’ and is well known in the park although who first named it that, remains a bit of a mystery. A short distance downstream from here is a weir, which has an outfall which runs through (or is supposed to!) what is known as ‘Dave’s Dyke’, (another mystery name) a narrow ditch to supply the lake. It tends to get over-grown over time and is not cleared as often as it should.  From beside and at a lower level than the lake, the stream runs behind Blatches Farm and past our Roach sign on to the eastern end of the park.
As it leaves the park the stream continues under ‘Cherry Orchard Way, parallel to Hall Road through Rochford Golf Course where it meets the Eastwood Brook. It then flows under the railway near Rochford Station, to the lakes by Bradley Way.  From there it flows under the main road by the Horse and Groom pub towards the tidal part of the river.

The Hawkwell Brook rises on the edge of Hockley Woods, to the north of HM Prison Bullwood Hall. It flows eastwards, through the woods and to the south of Great Bull Wood, and runs across the northern end of Belchamps Scout Centre. It is piped to pass under the B1013 Main Road in Hawkwell, south of  Clements Hall Sports Complex, to be joined by the Hockley Brook after which it’s considered a ‘main river’ and under the control of the Environment Agency. This is the ‘official’ Roach. The Hockley Brook rises near Southbourne Grove, Hockley, flows under the Shenfield to Southend Railway and then alongside it, to the junction on the north side of Rectory Road, running broadly parallel to Ironwell Lane. It then crosses beneath the railway and Hall Road, running beside Bradley Way to reach its junction with Noblesgreen Ditch by Rochford Reservoir.
Next comes the Eastwood Brook, which runs rises near Rayleigh Weir on the A127, and across Dawes Heath Road past Wyburns School following Eastwood Road, crossing Grovewood and Glenwood Avenues, the dips which have flooded a couple of times in recent years. It continues past the Bellhouse pub then under Rayleigh Road behind the David Lloyd Sports Centre. The stream then runs under Aviation Way and behind St Lawrence Church roughly parallel to the Airport Runway to join the Roach at Rochford Golf Course and on to the lakes.

Seawards of Rochford, behind the Horse and Groom at Salt Bridge, the river becomes tidal and continues east, running through flood plain marshes before discharging into the northern arm of the River Roach at Stambridge Mills, half a mile downstream from the town. Just after this point, Sutton Wharf with jetties, slipways, a boatyard and moorings, are on the south bank. This is where its main tributary, the Prittle Brook from Leigh and Southend joins as its southern arm.

From Stambridge Mills eastwards, the River Roach is tidal and becomes a wide river. From here the Roach is about 440 yards  It passes Paglesham, significant for its native oysters. Further east, it meets Paglesham Pool on the north bank, a creek which separates Wallasea Island from the mainland, although it is no longer an island, and onwards to the River Crouch.

We were very pleased to be invited to help Essex Wildlife Trust with a project to improve the habitat of the stream.  Below is part of their report and more information can be found on their website, see the link below.
​
​On Wednesday 24th February 2016 a group of volunteers, including members of the Friends of Cherry Orchard Park, members of the Conservation Team at Essex Wildlife Trust and the Catchment Manager from the Environment Agency installed 'woody debris' into the channel. This involved embedding lengths of wood into the bank, angled downstream and secured by driving wooden pegs into the river bed to keep them in place. A group were also involved in managing areas of bankside vegetation to remove over hanging branches, etc. This will reduce the shading of the channel and areas were chosen that are less disturbed by people and dogs so that in-channel vegetation can develop. This project has been funded by Essex and Suffolk Water's Branch Out fund. So we would like to thank them for their support. We would also like to thank the volunteers who gave up their time to help us. For more information take a look at the project page here.
Photos were taken by Samantha Dyer.  Thank you for letting us use them.