July 2015  Following on the heels of our AGM we were pleased to provide a link to the  Draft Proposals for the Lake in Cherry Orchard Park, prepared for RDC by the Wildlife Trust.

Members were very pleased to see these previously shelved proposals; the results of our recent survey showed that 87% of respondents feel that the development and improvement of wildlife habitats is ‘Very Important’ while 13% feel that it is ‘Important’.  A 100% positive response!

The Portfolio Holder for the Environment, Cllr. Jo McPherson, and Assistant Director of Environmental Services, Marcus Hotten, were keen to go ahead with these improvements but wanted to gauge opinion from the Friends group before proceeding.


This is the link to the proposals.

The most obvious plus points of the proposal are:


Questions we have already raised

Q
Will there be a dedicated  place where dogs can enter the water without disturbing the wildlife and without erosion to the banks? A shallow entrance possibly a fenced area as described by the Living Landscape presentation at our AGM.

A
Yes, most definitely

Q
Will there be safe view points for birdwatchers?

A
If there proves to be a need, this could be added

Q
Will there still be a path beside the lake?

A
Yes, the existing path will be diverted to the south side of the lake. 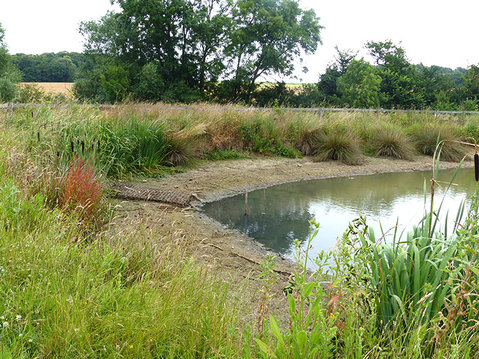 Update July 2014
The level of water in the lake has been lowered considerably.  Work will begin soon, hopefully this month, reprofiling the banks and making them safe. 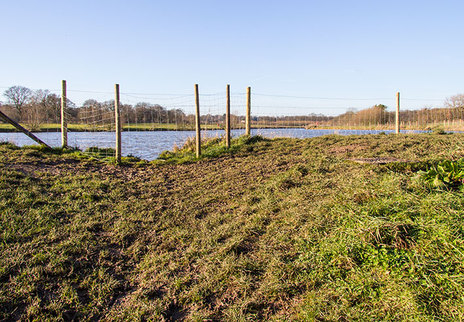 Work should begin towards the end of May when a new pipe will be installed.  This will allow the level of water in the lake to be lowered.  It will then be possible to examine the profiles and depths of the lake and consider the necessary regrading and re-profiling work that will best enhance the lake as a natural habitat for wildlife.  The final stage of the work will be the establishment of reeds and other vegetation.

There is no definite time scale for the work - it is of course dependent on weather as well as the availability of necessary machinery.  However, Marcus Hotten, Open Spaces Manager for Rochford District Council would like to see the work completed by September.

We are looking forward to seeing the work progress and are confident that RDC will take all necessary Health and Safety precautions.  However we remind families with small children and dogs to be aware that work will be taking place and to take extra care in the lake area.
Remedial Work

Remedial work is going ahead to deal with the serious erosion around the lake margins and the danger that the bund at the north east corner of the lake may fail causing serious flooding downstream.


The environment agency have agreed that at this time of year the remaining fish in the lake may be removed to alternative safe environments so that the level of water in the lake can be lowered.  There will be two netting operations, on the 14th October and 11th November.


Photos of the first netting session, thanks go to committee member Nicholas Cornish for these.

Firstly regarding the reports of dead eels.


The Environment Agency went down to the river, the adjoining brooks and the lake, but despite a good look around and contacting one of the residents to find an exact location for where they had seen dead eels, he couldn't find any and neither could he find anything that he felt would cause such a problem. He could only assume that whatever had occurred to cause the problem had now gone and we can only hope that it won’t come back. Obviously the EA are always interested to hear of any such unusual occurrence and will visit to investigate.


Dead and dying fish in the lake.

People may have heard in the news over the past few weeks incidents of fish dying and various waters throughout the country suffering from a lack of oxygen or the growth of algae which affects the fish. At the moment Rochford District Council are not aware that any of the waters in the district, including the lake at Cherry Orchard, are suffering from algae problems, however as we have had a long run of hot sunny weather and the fact that the lake has a history of having Blue Green Algae blooms, it is something that visitors to the lake should bear in mind. As you are aware, Blue Green Algae blooms are a natural phenomenon that may be toxic, therefore it is advisable that people visiting the lake, especially those with dogs, should be vigilant. If they have dogs that like to swim in the lake, it is advisable that they keep their dogs out of the water until they have had a chance to check it themselves, this is something that we would advise in any case as we know that on occasions people have thrown things (like a tent!) into the lake that dogs could get caught up in.


You can find more information about Blue Green Algae from the Environment Agency by downloading their leaflet.
Temporary Fencing

Temporary fencing will be erected around a large section of the lake. Information posters will go up on the fencing, the notice boards, the car park and along the bridleway. As you are aware, the lake  is suffering from severe erosion of the banks due to various factors including dogs entering the lake from all unfenced areas of the lake.

Hence, work will be undertaken to remedy the problem, but this cannot be done until later this year as the fish in the lake will need to be removed for the works to be completed and the Environment Agency will not allow the fish to be removed during the summer months as this would cause them stress.

However, in the interests of safety and to prevent further damage to the banks, temporary fencing will be installed now around a large section of the lake.

If any one wants any further information regarding this, they can contact Heather Meggison, Community Open Spaces Officer, Rochford District Council, 01702 318057 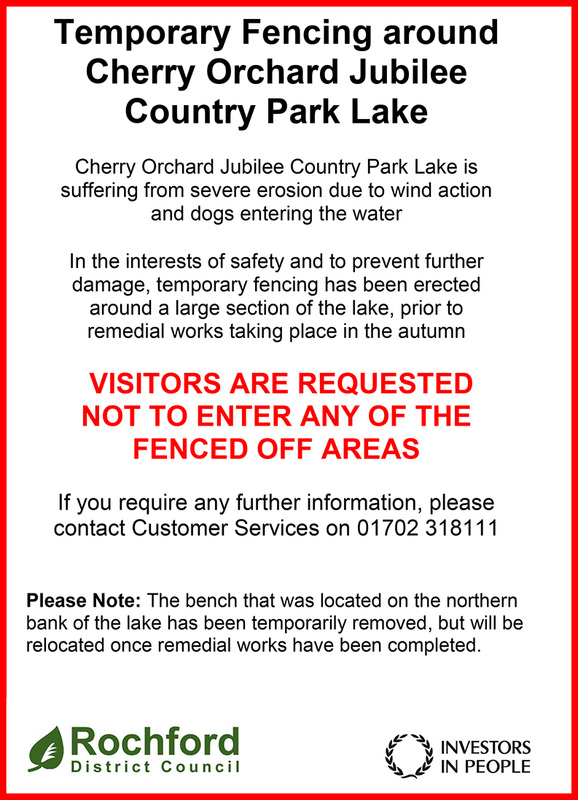